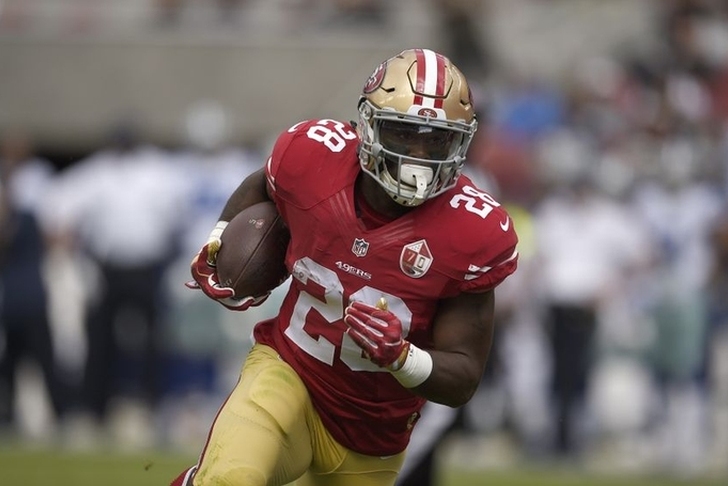 The San Francisco 49ers spent a second round pick on Carlos Hyde in the 2014 NFL Draft, but his impact has been limited by injuries. Now, it appears he might be falling out of favor in the Kyle Shanahan regime. Grant Cohn of the Press Democrat reports Hyde is struggling in OTAs and Cohn doesn't hold back his criticism.

"Hyde is the slowest and most indecisive running back on the team," Cohn writes. "I’m not saying he’s bad – he does have quick feet between the tackles, he can bounce inside runs to the outside and he plows through defenders. But he doesn’t seem to have the vision to succeed in Kyle Shanahan’s outside-zone running scheme. Tuesday, he was the only running back who never found a hole to run through. On one stretch play, he missed a cutback lane, tried to bounce around the outside even though the linebacker had set the edge and lost three yards. The Niners should trade him to a team that runs the zone read."

The Niners spent a fourth round pick on Joe Williams of Utah in this year's draft, at the request of Shanahan. In that same piece, Cohn says Williams is impressing at OTAs.

The other running backs on the roster competing for carries are Tim Hightower and Kapri Bibbs, both of whom were offseason additions. Hyde is a prime trade candidate, given the new regime and his apparent struggles. If Hyde isn't dealt, he could be a backup to Hightower or even Williams.

Hyde is in the final year of his contract, so the Niners could cut him if they wanted. However, Hyde has proven he can be an effective runner in the NFL, even if he's struggling in the Shanahan offense.