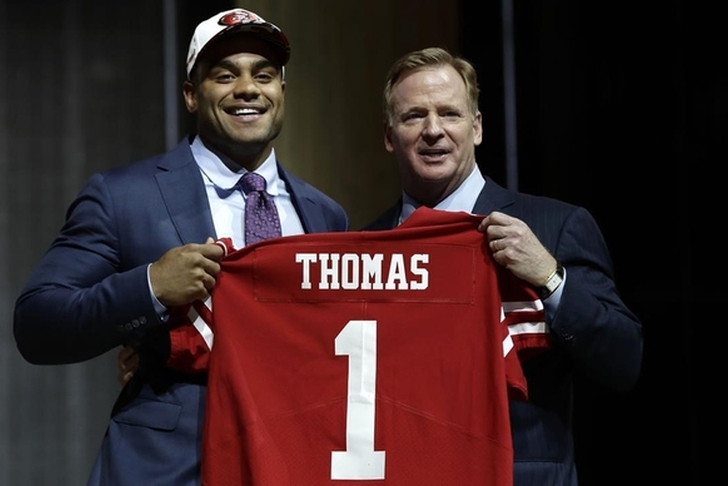 The 2017 NFL offseason is basically over, which means it's time to grade what the San Francisco 49ers did this year. Sure, a few more players might be traded, cut or signed, but it's likely the 49ers are finished making moves until roster cuts. Below are the 49ers offseason grades, which feature both free agency and the NFL Draft.

As for the grading, teams don't get a "B" just for showing up. A "B" is a good offseason, while an "A" is a great offseason. A "C" is not bad in my eyes, it's simply average at best. It's tough to get a "D," since that basically means a team botched almost everything about the offseason. Obviously there is a lot of opinion here, so hit me up on Twitter if you disagree with the 49ers' offseason grade.

With cap space approaching $100 million, it's not a surprise the 49ers spent and spent big. Thankfully, the moves were (mostly) smart. Landing Hoyer on a 2-year, $12 million deal is a great value. No one will confuse Hoyer with a franchise QB, but he's a quality backup or bridge starter. And at $6 million per year, that's what the 49ers are paying him to be. I don't love giving Juszczyk $21 million over four years, but to be fair, he can do more than just be a blocking fullback. The wide outs got a badly needed upgrade. Garcon isn't cheap, coming over on a 5-year, $47.5 million deal with $20 million guaranteed, but he's vastly better than anything the 49ers had last year. I still think he's a high-end No. 2 WR, but the Niners can safely plug him in as the No. 1 this year and the contract is structured in way that they Niners can get out of it after two years. Goodwin provides plenty of deep speed and keeping Kerley as the reliable, cheap(ish) slot option was a good move.

Coyle and Smith both know the Seahawks' 4-3 defense the Niners are moving to, but Smith was too pricey. He's just not worth a 5-year, $26.5 million deal given his issues in coverage. Mitchell's 4-year, $16 million deal seemed a bit on the pricey side too. Still, as a rebuilding team, the Niners likely had to overpay a bit to land players. Williams could be the new nickel corner.

The players the 49ers lost aren't anything to cry about. The Niners need a fresh start and only a handful of those players will make any impact on NFL rosters next year.

I didn't love all of the 49ers moves. I thought they paid too much money to a few guys, but with so much cap space and being a rebuilding team, they have more leeway. Overall the 49ers found a way to upgrade the team's middle class. Sure, they didn't get a star defensive player like Brandon Williams, Stephon Gilmore or A.J. Bouye, but maybe that's for the best. The 49ers are still several years away (and a franchise QB) from making anything resembling a Super Bowl run. So what they did this year was smart: upgrade the middle-tier players, build through the draft and roll over that cap space.

Up until the C.J. Beathard pick, the Niners killed this draft. They moved down and still got Solomon Thomas and then landed the best round one value in Reuben Foster. The first round of the NFL Draft couldn't have gone any better for the 49ers.

Witherspoon was the proper range and he's a perfect fit in the 49ers' new scheme. He could actually start this year for the Niners.

But Beathard was a terrible pick. He couldn't even complete 60 percent of his passes over his career, I'm not sold on his arm strength (although it's not terrible), he regressed this year and should not have been drafted. I know Kyle Shanahan loves him, but we'll see. Plus, the Niners are bad next year, they'll probably just draft a QB early or sign someone. Williams, if he wants to keep playing after retiring earlier in his career, could be a nice piece, although it was a reach. I was surprised the Niners ignored their draft board to take Williams, who wasn't even on it. Both of the first two offensive picks were mainly Shanahan, so I'm curious to see how they fare.

I love getting George Kittle and Trent Taylor, even if Taylor was a slight reach. Taylor is the slot WR of the future and Kittle could start at TE before too long. This was a pretty strong start for John Lynch as GM, but the Beathard pick costs the 49ers a straight-up A.

I'm the first to admit I was very worried about the 49ers hiring John Lynch and his complete lack of experience as general manager. But after one offseason, I like what I see. The Niners weren't perfect, but as a whole, this was a strong offseason. The middle class was upgraded in free agency and the Niners got some quality pieces via the draft (which was weighted more for me). That's about as well as things could have gone this offseason for the 49ers. For the first time in several years, there's hope and optimism around this team.

Follow our San Francisco 49ers team page for all the latest 49ers news or download the Chat Sports App!