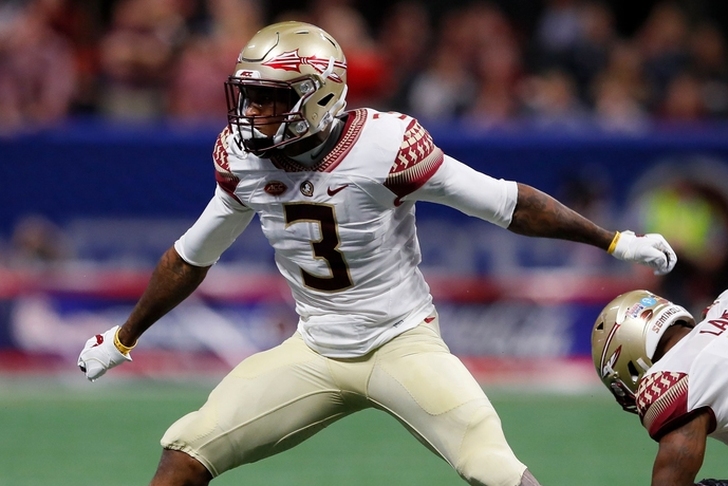 The San Francisco 49ers ended the regular season strong winning five games in a row with quarterback Jimmy Garoppolo as their starting quarterback, and they have capitalized on that momentum with a number of stellar signings in free agency. However, this team still has a few holes they need to fill if they want to be a playoff team, and they're looking to the draft to fill those holes. Here are the latest 49ers draft rumors you need to know:

49ers linked to Derwin James
San Francisco is expected to get help in the secondary early in the draft, and FanSided's Brad Weiss is projected them to take Florida State safety Derwin James in the first round.

The team needs a lot of help in the secondary, and they may be able to get a guy like Derwin James at No. 9 overall. James is a very versatile prospect, and had he not gotten hurt in 2016, he may be a top-5 pick this year.

James not only played safety at Florida State, but also cornerback, while being the top return man in school history. The 49ers are doing a nice job building up this roster, and James could be a game-changer at the next level.

San Francisco interested in Josh Sweat
James' teammate at Florida State, defensive end Josh Sweat, will work out for the 49ers later this week, according to Draft Analyst's Tony Pauline.

On the other hand, pass rusher Josh Sweat continues to impress. Sweat clocked anywhere from 6.88 to 6.95 in the three-cone and looked good in both defensive line and linebacker drills. The linebacker drills were run by the Baltimore Ravens.

The Cincinnati Bengals, Philadelphia Eagles and New York Jets all had coaches on hand to watch Sweat, who will be working out for the San Francisco 49ers later this week.

49ers unlikely to trade No. 9 pick
San Francisco was one of the big movers in the NFL Draft last season, moving back from No. 2 to No. 3 overall before trading back into the first round to get Reuben Foster, but SB Nation's James Brady doesn't see the 49ers making similar moves this season.

The 49ers, in any trade to move up, would have to give up ninth overall, plus the second-round pick they got from the New Orleans Saints, and more on top of that, at the very least a second-round pick in 2019. Saquon Barkley, Bradley Chubb, Minkah Fitzpatrick and Quenton Nelson might be worth that, but it’s not a price the 49ers will be willing to pay.

On top of that, I bet the 49ers won’t have many suitors for trading down either, at least not at a premium, because the important quarterbacks will be gone by then. The Buffalo Bills will probably move up, and soon, and they’ll get well in front of the 49ers, I think.

General manager John Lynch has previously stated that he'd be willing to deal again this year, but given the circumstances this season, any trades involving the No. 9 overall pick seem unlikely.