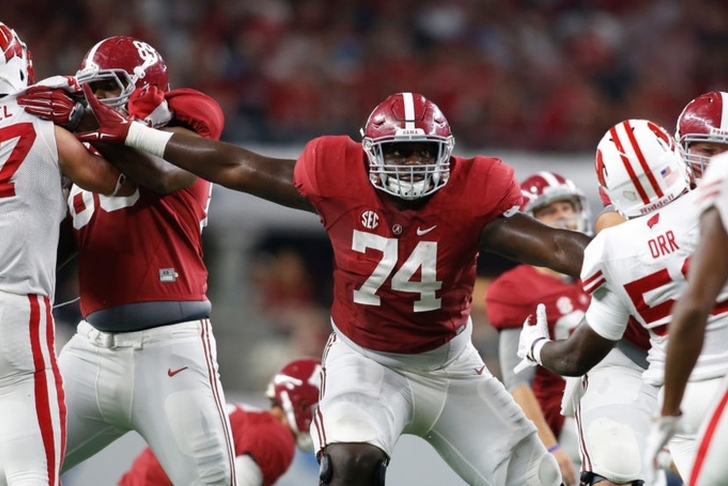 The San Francisco 49ers hold the No. 2 overall pick in the upcoming NFL Draft, but with many needs on their roster, they have been open to fielding offers for it in exchange for more picks.

R.J. White of CBS Sports expects them to make such a deal with the Browns, giving San Francisco the No. 12 pick, a second-rounder, fourth-rounder, and two 2018 second-rounders from Cleveland. By trading down, White expects the 49ers to bolster their offensive line by drafting Alabama's Cam Robinson.

Would the 49ers do this deal and not land the Browns' first-round pick in 2018? Both QB deals in the 2016 draft involved trading future first-round picks, but Cleveland might be able to escape paying that price, for three reasons: 1. Their second-round pick in this draft is the first in the round, making it higher in value than any non-first in those previous deals; 2. They have multiple second-rounders to offer in 2018; 3. They can afford not to get a Day 3 pick back thanks to their large cache of selections. With this deal, John Lynch can buckle down and rebuild the 49ers roster.

The 49ers are likely feeling out potential prospects to select if they move off No. 2. How else would explain a scheduled visit with Robinson, who has next to no chance to make it to them in the second round? The massive lineman would start immediately on the right side, helping to alleviate some of the concerns teams might have using him on the blind side. This is also a prime spot for someone looking to trade up for Pat Mahomes (looking at you, Texans).

Robinson started the college season a projected top-five pick, but poor play this season has dropped him to a mid- to late-first round prospect. He is a great run blocker and can start immediately as a right tackle, but struggled as a left tackle this past season.

The Panthers are reportedly interested in trading up for that No. 2 pick, but nothing tangible has happened on that front at this time.