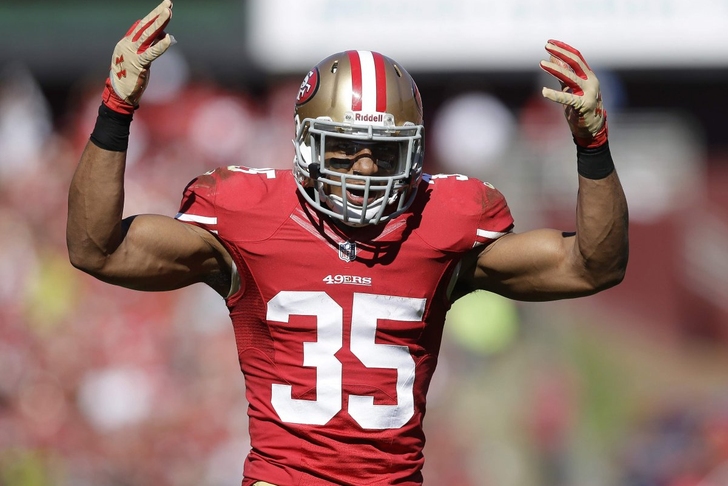 The San Francisco 49ers' season is over, but there's still lots of work to be done. Free agents will be in the headlines throughout the offseason, and the team will need to make the most of the opportunities available to ensure a successful 2014-15 season. The Niners will also have an opportunity to improve through the NFL Draft, and although they're a very deep team in most areas, there are still a few things that need to be addressed.

For the Niners, the top priorities in the upcoming NFL draft will be wide receiver, safety, center, and adding to overall depth.

Wide receiver depth could become a huge problem if the 49ers are unable to re-sign Anquan Boldin. The only other viable options at this point for the 49ers are Michael Crabtree and Quinton Patton, who flashed impressive potential in the preseason and showed signs late in the season that he could become a very solid receiver. It'll be tough to get a real playmaker with the 30th pick, but this team has found diamonds in the rough before.

If the 49ers decide to pass on re-signing Donte Whitner, strong safety will become one of the most important positions to address. There's no safety on the current roster they would feel comfortable installing as the full-time starter, which means the team would likely pick one in the draft. They hit a home run last year in the draft with safety Eric Reid, and could look to do the same this year if they part ways with Whitner.

Re-signing center Jonathan Goodwin at the age of 35 wouldn't be ideal, so it makes sense to look for a center in the draft. The 49ers have done an outstanding job of drafting offensive linemen over the past few years, so it wouldn't be surprising to see them take that route again.

Other positions where the 49ers may look to add depth are at cornerback (if they don't re-sign Tarell Brown) and quarterback later in the draft, since Colt McCoy is a free agent. Defensive line depth became a problem for the 49ers this season due to injuries, which may prompt them to try and add depth there as well. The talent currently on the 49ers roster allows them to make a lot of luxury picks in positions that are already strong, which gives them a huge advantage over many teams.

The 49ers were hit with a boatload of injuries late in the season, especially in the final game against the Seattle Seahawks. Navorro Bowman, Frank Gore, Patrick Willis, Mike Iupati, Ray McDonald, Ian Williams, Bruce Miller, Chris Culliver, and Marcus Lattimore all  finished the season with an injury or will require some sort of offseason surgery to repair a nagging injury. Many of these players were starters coming into the 2013-2014 season, and even the ones who weren't considered starters, such as Culliver and Lattimore, could've made a big impact if healthy.

One of the keys to the 49ers offseason will be to simply get healthy. No NFL team can afford to go into a season with a multitude of injuries, and if the 49ers had to do that with the players who are injured right now, they would have a tough time winning games.

Bowman and Willis make up the best linebacking duo in the league and bring leadership to the defense that can't be replaced. Bowman suffered a torn ACL and MCL, but is expected to be ready for the start of next season. It isn't a guarantee that he will be ready - everyone responds differently to knee injuries - but having a healthy Bowman to start next season will be a big deal. Willis underwent surgery on his hand that isn't expected to be serious, which is great news for the 49ers.

Ian Williams sustained a broken ankle early in the season, but should be ready to go by the time training camp starts. Ray McDonald had surgery to repair a partially torn biceps tendon, and there's no known timetable for his return. Williams and McDonald are key contributors to the 49ers' defensive line and add good depth alongside Glenn Dorsey and Justin Smith.

Frank Gore had surgery on his right ring finger, which isn't considered serious. Gore needs to find the fountain of youth for the 49ers next season, as he wore down a bit towards the end of 2013. One possible solution to that problem could be Marcus Lattimore, who didn't play at all during his rookie year due to a gruesome leg injury he suffered in college. Fullback Bruce Miller, a versatile contributor to San Francisco's offense, also went down early in the year. Colin Kaepernick will greatly appreciate having him back to start next season.

Chris Culliver would most likely be Tarell Brown's replacement at cornerback if Brown were to leave in free agency. Culliver suffered a torn ACL in training camp and is expected to be ready for next year, which could be a nice boost for an inconsistent 49ers secondary.

There are two players in particular that have great opportunities to step up and become big impact players next season - Marcus Lattimore and Quinton Patton. Both players were injured for much of their rookie seasons after being drafted in 2013. Lattimore missed the entire season, and Patton played in just six games.

Quinton Patton has a chance to be the 49ers' number three receiver, and potentially even the number two guy if Anquan Boldin doesn't re-sign. Patton showed signs of being a solid NFL receiver in the preseason and again late in the regular season, and the 49ers need help at the wide receiver position regardless of whether Boldin re-signs or not. There's plenty of demand for another offensive threat in the 49ers offense who could make Colin Kaepernick's job a bit easier. Patton played as the third receiver for the 49ers in their playoff game against the Seahawks. While he didn't have a huge impact on the game, if he can improve during the offseason and become a more well-rounded receiver, he could become a huge weapon for the 49ers next season.

30 years old is when many NFL running backs start to see a decline in overall production. Frank Gore will be 31 next season. That said, somebody may need to step up sooner rather than later. Marcus Lattimore is a great option to replace Gore. While he still hasn't played a down in the NFL, he has the potential to become the next great 49ers running back. Frank Gore's contract expires after next season, and there's no guarantee that the Niners will be bringing him back. Lattimore is a very similar size and has had plenty of time to recoup from the knee injury he suffered his senior year at South Carolina. He should be fresh coming into next season and it wouldn't be surprising to see him at least take over the backup running back position, if not more.