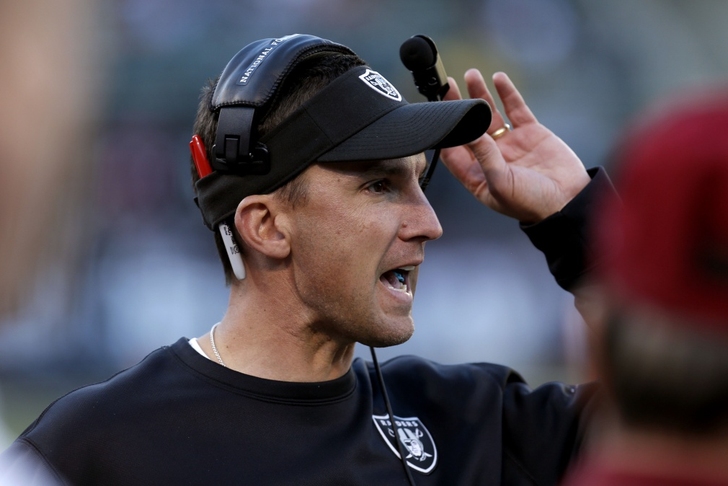 Vic Fangio, as expected, will not remain with the team after being passed over for the head coaching job. That leaves a vacancy at defensive coordinator...and there are already two former Raiders coaches being linked with the position.

Per Tim Kawakami of the San Jose Mercury-News, former Raiders DC Jason Tarver is a possibility...which is strange for several reasons.

First, Tarver's Raiders teams never really impressed. They finished 18th in total defense in his first year, 2012, then regressed to 22nd in 2013 before ranking 21st in 2014 despite the addition of several veteran free agents.

More interestingly, that was Tarver's only defensive coordinator job in the NFL ranks. He spent 2005-2010 as 49ers linebackers coach, and got his first coordinator job at Stanford in 2011 (Tarver was co-DC with current Vanderbilt HC Derek Mason). That led to his job with Dennis Allen and the Raiders. Tarver did work closely with Tomsula while with the 49ers, but his lack of success makes this a curious hire at best.

The other former Raider named is Dennis Allen, who CSN Bay Area's Matt Maiocco reported was 'in play' for the DC job. Allen has no history with the 49ers, and spent even less time as a coordinator than Tarver (he was Denver's DC in 2011 after five years as a position coach for the New Orleans Saints). Allen went 8-28 in a little over three seasons as Raiders HC.

It's hard to see either of these moves getting a positive response from the 49ers faithful, especially with a fan favorite in Vic Fangio heading the other way...stay tuned.