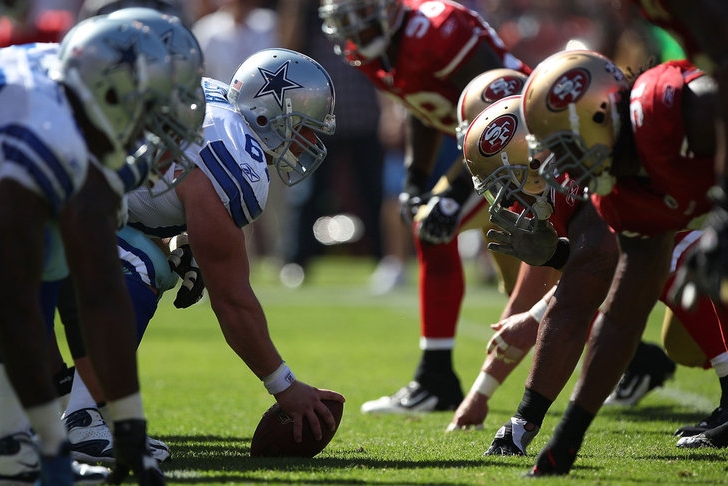 The San Francisco 49ers kicked off their season in Dallas against Tony Romo and the Cowboys, and they have to be thrilled with their first-half display so far.

The Niners clearly heard the criticism leveled at their defense, and they quickly made it clear that even without Navorro Bowman and Aldon Smith, they won't miss a beat.

The Cowboys weren't even a minute into the opening drive of the game when Dan Skuta forced a DeMarco Murray fumble, and Chris Culliver scooped it up and took it 35 yards to the house. The Cowboys were able to regain their composure and drive into the red zone, but the defense held firm and forced Dallas to settle for a field goal.

Colin Kaepernick and the 49ers offense took the field for their first series of the 2014 season, and it took just three plays for them to drive 80 yards downfield for a Vernon Davis touchdown.

Davis scored his second TD of the quarter after a Tony Romo interception set the Niners up at the Dallas two-yard-line, and it was a big moment for a player starting to challenge 49ers legend Brent Jones for the title of best Niners TE of all time.

At the end of one, the Niners led 21-3 despite their offense spending just 94 seconds on the field.

Things went from bad to worse for Dallas early in the second quarter, as yet another Tony Romo interception canceled out what had been a promising drive for the Cowboys. Patrick Willis picked off the pass deep in the end zone, and the 49ers offense took over at the 20.

The drive didn't end in points, but 49ers punter Andy Lee pinned the Cowboys back on their own one-yard-line.

Dallas avoided the safety after WR Dez Bryant gave them some breathing room, but it wasn't long before the Tony Romo's rough afternoon got even worse.

Romo tried forcing a deep ball to Bryant just three plays later, even though the Cowboys' #1 WR was being covered tightly by two 49ers. Perrish Cox hauled it in at the San Francisco 36, and the winded Cowboys defense had to get right back out on the field.

The 49ers drive began with just under four minutes remaining in the half, and the offense capitalized on some lax defending to cap off the second quarter with another touchdown. Rookie RB Carlos Hyde was the man this time, and he immediately showed off the speed and power that have him labeled as Frank Gore's successor in the backfield.