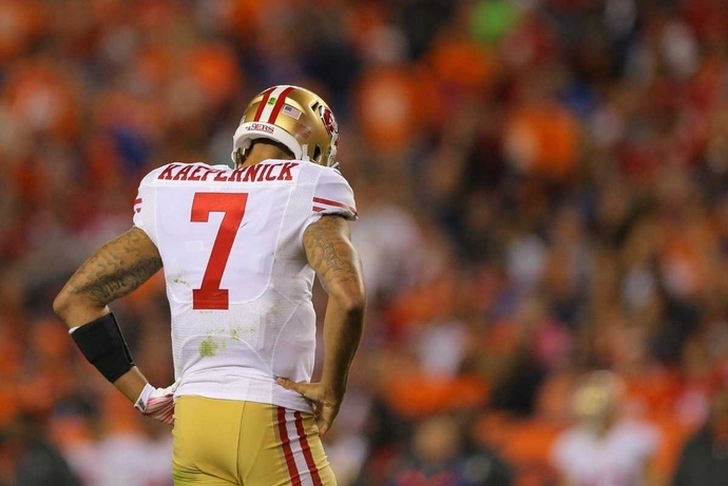 The San Francisco 49ers won't be making the playoffs this season. At 4-9, the 49ers have already been eliminated from playoff contention. That means attention is now turning to the offseason and what the 49ers need to do to have more success next year.

With the season essentially over for San Francisco, we're here to highlight the 49ers' team needs. The 49ers lost a lot this season, with retirements, defections and injuries hitting the team harder than most. That means the 49ers have a ton of needs to address in free agency and the draft. The 49ers have plenty of cap space as well, with over $40 million in money to spend next season. That doesn't include the likely rise in the salary cap. Although fans might want a new coach, general manager, owner or whatever, I'm only detailing positional needs. With all that in mind, here are the 49ers 2016 Team Needs:

It seems like Colin Kaepernick won't be on the 49ers next season. Moving him (via trade or release) would free up nearly $10 million in cap space for the team. That would essentially leave the team with just Blaine Gabbert at QB. Although Gabbert has played okay this year, it's tough to declare him the franchise QB, especially given how bad Gabbert with the Jaguars. The 49ers could try to grab a QB in the first round of the draft, with Jared Goff and Paxton Lynch as the top two options. Signing a veteran option is possibility, as is spending a later pick on the spot.

Ian Williams has been very good this season, but is a free agent. The team needs to bring him back.

Joe Staley is great, but Erik Pears needs to be replaced. Anthony Davis retired before this year, but he could return in 2016. That would take care of the need for a starting tackle. Finding a young swing tackle would be smart since Staley is aging.

NaVorro Bowman isn't quite his old self yet, but is still worth starting. Michael Wilhoite was awful this season and is a free agent. Perhaps Gerald Hodges can take over as a starter, but the 49ers can't go with Wilhoite again.

Alex Boone, Andrew Tiller and Jordan Devey are free agents. Boone is talented, and re-signing him to pair with Andrew Tiller (who was pretty good this year) would be smart. Daniel Kilgore has battled injuries, but shows promise at center. Marcus Martin was terrible at center this season. A starting lineup of Boone-Kilgore-Tiller is good enough for the 49ers. Getting some depth in case injuries occur is smart.

Anquan Boldin is 35 and will be a free agent. That means he might leave and chase a championship elsewhere. Torrey Smith is locked up with the team for a few seasons, but the 49ers are thin at this spot. Quinton Patton and Bruce Ellington might get more of a shot next season, but new talent is needed.

Aaron Lynch is the real deal, but Aaron Brooks is aging and regressing. Eli Harold has potential, but the 49ers need more at this spot.

Tramaine Brock and Kenneth Acker have shown promise this season and have been solid starters. Jimmie Ward has been solid in the slot and there are a few young players with potential. However, the team doesn't have a true shut-down corner. The 49ers could have a chance to take one of those in the draft.

Carlos Hyde is the starter, but the 49ers need more depth. Shaun Draughn has done okay this season, but is a free agent. Travaris Cadet and Reggie Bush are both free agents and the team needs a third down back.

This is low on the priority list, as Garrett Celek, Vance McDonald and Blake Bell are serviceable/have potential. It's only on here because Celek is a free agent. The team should bring him back and it should be cheap.

Phil Dawson is 40 and a free agent. The Niners need to either bring him back and/or add someone younger.