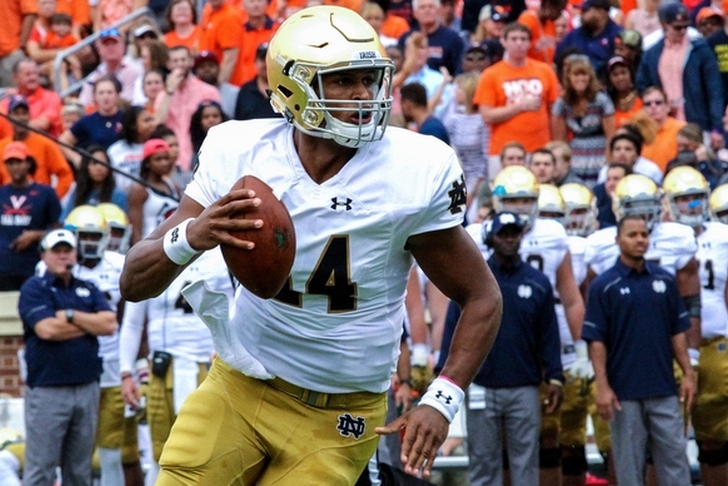 The 2017 NFL Draft will start in just over a week, and there will be plenty of trades. That's just the nature of the draft, although those trades are very difficult to predict. One team that could make some noise is the San Francisco 49ers. With a new regime, the 49ers are a wild card this year and also hold the No. 2 overall pick, a prime trade target.

To help determine the value of each pick and what it would cost, we're using the NFL trade value chart. While the trade values won't match up exactly, we tried to get them as close to even as possible. With that in mind, here are three trades the 49ers could make in the NFL Draft.

If the Niners actually are high on someone like DeShone Kizer, what happens if he's on the board in the late first round? The 49ers might be forced to jump ahead of teams like the Saints, Browns and maybe even Steelers. Heck, the Bears might try to move up. By giving up an early fourth (it's almost a perfect match for the trade value chart), the Niners would be able to get their franchise QB. And, they'd be able to lock him up on the fourth year option.

The Niners could be in position to move down in round two and deal their pick to a team trying add a player they're high on. We've seen that plenty in recent years and moving down nine picks would net them another top 100 pick. The Saints have never shied away from trading up in the draft. Perhaps there's a defender still on the board they want to add. The 49ers win this trade so they could include one of their sixth rounders if they needed to sweeten the deal for New Orleans.

This one has already been rumored, with the Panthers likely focusing on either Solomon Thomas or Leonard Fournette (likely the former). The value chart suggests the 49ers should get both the Panthers second round picks, their late 3rd rounder and at least one early future pick as well. But since a QB won't be involved, a more realistic trade could look similar to the one we saw a few years ago involving the Dolphins and Raiders. Back in 2013, the Dolphins shipped off the No. 12 and No. 42 overall picks to the Raiders for No. 3 overall. So, perhaps the Niners would take a discount and pick up an extra top 50 pick in the process. If we get a blockbuster trade in the first few picks, I expect the Niners to be involved.

Follow our San Francisco 49ers team page for all the latest 49ers News or download the Chat Sports App!