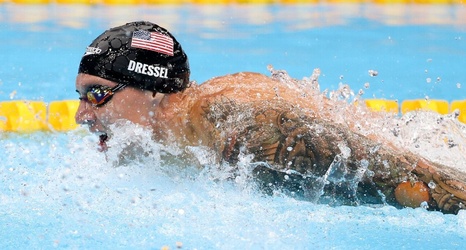 TOKYO -- Caeleb Dressel won his third gold medal of the Tokyo Olympics with a world record in the 100-meter butterfly Saturday.

Dressel led right from the start and held off Hungary's Kristof Milak to touch in 49.45 seconds, breaking the mark of 49.50 that the American set at the 2019 world championships in Gwangju.

Milak, winner of the 200 fly, earned the silver with a blistering 49.68. The bronze went to Switzerland's Noe Ponti.

Dressel's victory came in the first of three races on his morning schedule.

He was also set to compete in the semifinals of the 50 freestyle before returning to the deck one more time to anchor the 4x100 mixed medley relay, a new Olympic event that features two men and two women on each team.