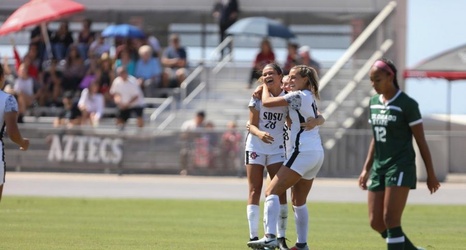 Freshman forward Rachelle Elve (28) celebrates with her teammates after scoring a goal during the Aztecs' 2-0 win over Colorado State on Sept. 29 at the SDSU Sports Deck.

San Diego State women’s soccer won its first Mountain West Conference match of the season against Colorado State, pulling through with a 2-0 shutout Sunday at the SDSU Sports Deck.

This game comes just two days after a 3-2 conference loss to Wyoming on Friday.