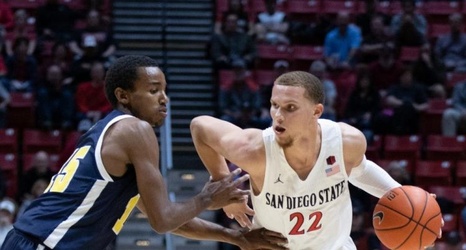 Fans got their first look at transfer junior guard Malachi Flynn during the Aztecs' 81-56 exhibition win over UCSD on Oct. 30 at Viejas Arena.

In San Diego State men’s basketball first game of the season, the Aztecs’ talent overpowered the Division II UC San Diego. The game was more about testing players to see how they look in live-game action, SDSU head coach Brian Dutcher said before the exhibition. It wasn’t so much about how SDSU won by 35 points, but rather, how the 2019-20 Aztecs looked for the first time. Here are three observations in SDSU’s 86-51 victory over UCSD on Wednesday night at Viejas Arena.