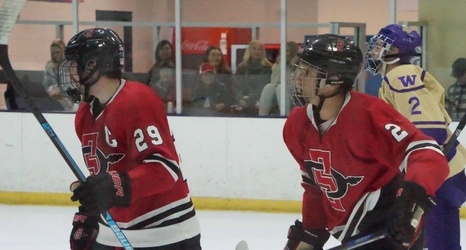 Junior Reece Breuckman (left) skates next to senior Adrien Wisch (right) during a stoppage of play in the Aztecs’ 6-1 win over Washington on Nov. 1 at Joan Kroc Center.

San Diego State hockey was looking to secure a clean sweep over the weekend against PAC-8 teams but was unsuccessful due to a 4-3 loss to Arizona State on Sunday, Nov. 10 at the Joan Kroc Center.

The Aztecs started the weekend off strong with two wins over San José State University in their Friday and Saturday games by final score of 6-1 and 6-3.

However, the Sun Devils came out with a defensive force that the Aztecs ultimately weren’t able to combat.