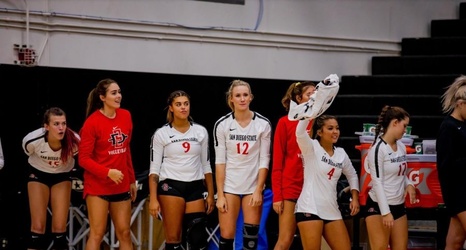 The San Diego State volleyball team's bench looks onto the court during the Aztecs' 3-1 loss to UNLV on Oct. 3 at Peterson Gym.

San Diego State volleyball enters its next game facing something for the first time other than its opponent this season: a losing streak.

The team will face New Mexico at 2 p.m. on Oct. 5 at Peterson Gym in an attempt to snap the short two-game skid.

After SDSU (8-6, 1-2 Mountain West Conference) lost to UNLV (5-9, 1-2 MWC) in four sets on Thursday, head coach Deitre Collins-Parker said the team will have to change its mindset heading into Saturday’s matchup.