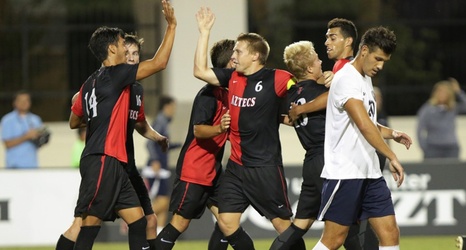 Three was the magic number for the San Diego State men’s soccer team as it cruised to a 3-0 win over the George Washington University Colonials in Sunday’s game at the SDSU Sports Deck.

Senior forward Rene Reyes scored his third goal of the season; the Aztecs scored three goals for the third straight game, and the team improved its record to 3-0 for the first time in Head Coach Lev Kirshner’s 16-year tenure.

“We realize that we’re a great team in a great conference, which is obviously going to be tough every day,” junior defender Matt Callahan said.