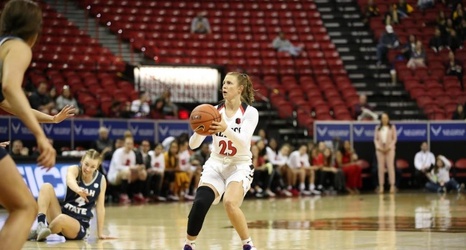 Senior guard Taylor Kalmer looks to pull up for a jumper during the Aztecs against Utah State on March 1 in the first round of the 2020 Mountain West Championships in Thomas and Mack Center in Las Vegas.

LAS VEGAS — San Diego State women’s basketball fell 81-79 against the Utah State Aggies in the first round of the Mountain West Conference tournament on March 1 at the Thomas and Mack Center.

The Scarlet and Black showed some fight and propelled their way back after being down by as much as 15.

SDSU (14-17) forced the game into overtime, but the Aggies (8-22) pulled away after forward Hailey Bassett made a jumper from 10 feet out with two seconds left.