Pelaez leads the charge on the pitch for men’s soccer 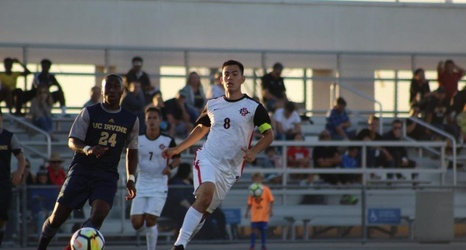 Redshirt junior midfielder Pablo Pelaez chases after the ball during the Aztecs 2-1 victory over UC Irvine on Sept. 9 at the SDSU Sports Deck.

Not only does the redshirt junior midfielder contribute goals and assists for the Aztecs, he also spiritually represents the heart and fight of SDSU soccer as its team captain.

Seven games into the 2018 season Pelaez has tallied up ten points, four goals and two assists while playing a total of 489 minutes.

Pelaez’s most recent goal was scored from the penalty spot in the first minute against UNLV on Sept.