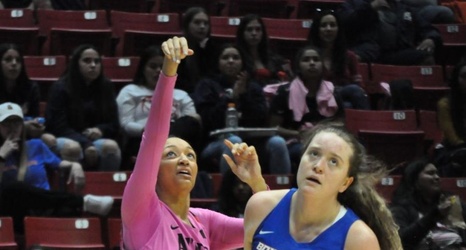 After losing leading rebounder to season-ending injury, senior forward Monique Terry has stepped up for the Aztecs.

Senior forward Monique Terry fires a 3-pointer over a Boise State defender during the Aztecs' 69-67 overtime loss on Feb. 15 at Viejas Arena.

Most of the team’s core remained intact even after a few roster changes, including the program’s all-time single-season 3-point record holder in Najé Murray who transferred to Cal.