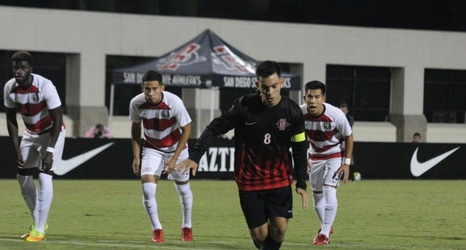 Junior midfielder Pablo Pelaez lines up for a kick during the Aztecs 2-1 victory over UNLV on Sept. 24 at the SDSU Sports Deck.

The Aztecs came out with firepower from the opening whistle. Within the first minute, SDSU controlled ball possession and pressed into the attacking third.

Just three minutes into the game, a mistake from USD’s backline allowed the Aztecs to take advantage.