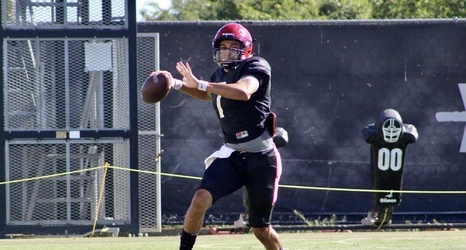 The competitive spirit was in the air at San Diego State on April 30, as SDSU football put on a show for friends and family at the team’s annual intrasquad spring game.

The close contest resulted in a victory for Team Aztec, as it took down Team Warrior 10-3. The winning team received a steak dinner for its efforts, while the losing team got hot dogs on paper plates with plastic utensils.

This game was about much more than steaks and hot dogs, however, as it marked the end of the team’s spring practices, as well as it being the first time Aztec football has played in front of any sort of home crowd since December 21, 2019, at the New Mexico bowl.