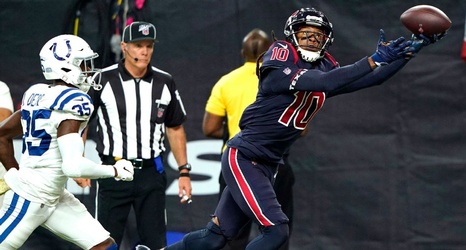 HOUSTON -- Houston Texans quarterback Deshaun Watson has two home-run-hitting receivers in Will Fuller and Kenny Stills, so star receiver DeAndre Hopkins’ role has been a little different this season. But it was a throwback night in the Houston Texans’ 20-17 victory over the Indianapolis Colts on Thursday.

Entering the game, Hopkins was averaging 9.9 yards per reception this season, well below his 14.1 average over his first six NFL seasons. But against the Colts, Hopkins had two huge plays that put the Texans in first place in the AFC South.