Column: Finishing opportunities to score are a growing concern for men’s soccer 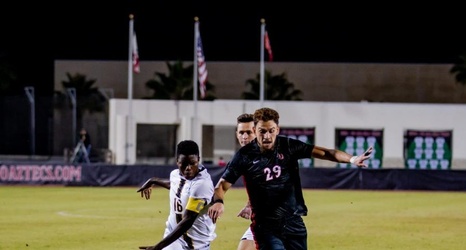 Senior midfielder AJ Valenzuela attempts to get past the Golden Bears defenders during the Aztecs' 4-0 loss to California on Oct. 10 at the SDSU Sports Deck.

In the past two games San Diego State men’s soccer has produced a combined 20 shots and 21 corner-kicks – the kind of output that normally wins games – but zero goals and two losses were the results of those efforts.

The object of the game is to score goals, but it appears the Aztecs are struggling in that category at the moment.

SDSU is ranked 108th in total goals scored amongst Division I teams.