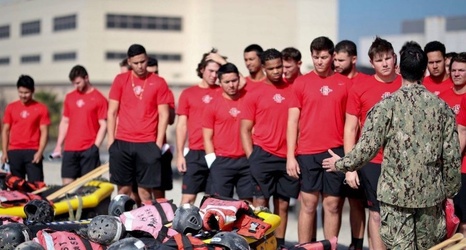 The Naval Special Warfare Center in Coronado is a place to train those who wish to become a part of the Navy SEALs.

A proving ground for those who wish to serve their country and fight for its citizens.

On Jan. 17, it was also used to help San Diego State baseball prepare for its upcoming season.

The Aztecs have been going to Coronado since the 2011 season in an effort to increase the team’s mental toughness, as well as its team bonding.

The day began with a class on what it’s like to be a Navy SEAL and talks on mental toughness and leadership, followed by a campus tour and a training session on a nearby beach.