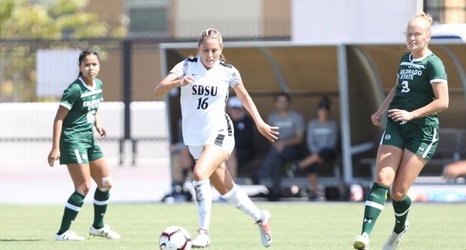 Senior forward Darcy Weiser dribbles the ball during the Aztecs' 2-0 win over Colorado State on Sept. 29 at the SDSU Sports Deck.

Anytime an athlete comes back from injury, it usually takes time to get back to top form.

After missing the first eight games of the season because of a lower body injury, Weiser has already scored two goals and notched an assist in just four games – including a game-winning goal against UNLV on Oct. 4th.

Weiser, a native of Huntington Beach, California, said she simply wants to contribute in anyway she can.