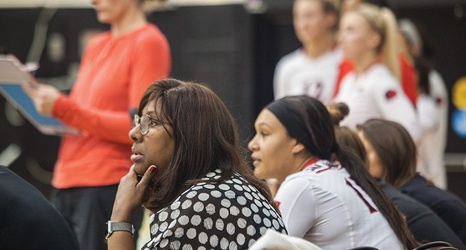 Deitre Collins-Parker ponders during SDSU’s win over Air Force on Oct. 8, 2017 for her 300th win at SDSU.

Now, Volleyball head coach Deitre Collins-Parker is also being relived of her duties, according to a Tuesday statement.

Her departure follows a similar script to Kirsher’s, with Wicker saying the change in leadership is “necessary to maximize the potential of the program.”

“I appreciate Deitre’s time and commitment to San Diego State volleyball and all that she has done for the good of the sport through the years,” Wicker said in a statement.