Aztecs use strong second half against Wyoming, improve to 5-1 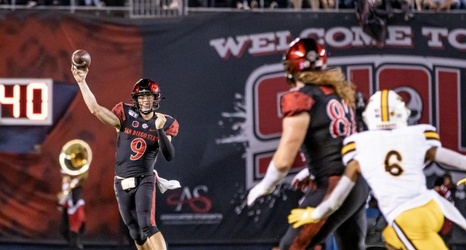 Senior quarterback Ryan Agnew throws on the run during the Aztecs' 26-22 victory over Wyoming on Oct. 12 at SDCCU Stadium. Agnew finished the game with 209 yards and two touchdowns on 21 of 32 passing.

San Diego State senior quarterback Ryan Agnew took a snap out of shotgun from his own 24-yard line with 6:43 left in the game. For a split second, the offensive line froze, seemingly confused on what to do.

Agnew scrambled left into a pile of Wyoming defenders, and, at the last second, made a jump toss to senior fullback Issac Lessard who gained 18 yards before losing his footing at SDSU’s own 42.