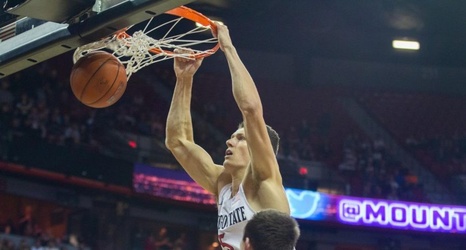 Senior forward Yanni Wetzell completes a slam dunk during the Aztecs' 81-68 win over Boise State on March 7 at the Thomas and Mack Center in Las Vegas.

The Scarlet and Black lost to the Aggies in the title game by a score of 64-57.

This time around, the Aztecs look to avenge that loss.

Same programs but different feeling inside Thomas and Mack Center

The last time these two teams met inside UNLV’s home gym, Utah State was able to pull away late in the second half to claim its first-ever conference tournament trophy.