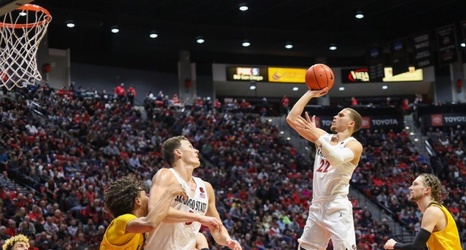 Junior guard Malachi Flynn goes for a floater in the lane during the Aztecs' 72-55 win over Wyoming on Jan. 21 at Viejas Arena.

The 2010-11 Kawhi Leonard-led San Diego State men’s basketball team is widely regarded as the best in program history — a team that finished 34-3 with an appearance in the Sweet Sixteen of the NCAA Tournament.

That team started a program-best 20-0.

No. 4 SDSU (20-0, 9-0 Mountain West Conference) — along with the matching the longest winning streak in program history of 20 games — has officially tied its best start in school history when the clock hit triple zero in a 72-55 win over Wyoming on Tuesday night at Viejas Arena.