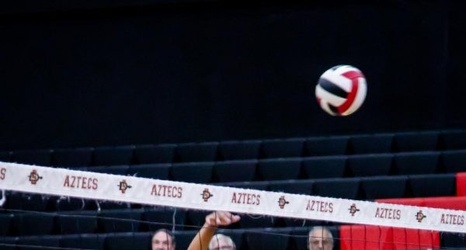 Sophomore outside hitter Victoria O'Sullivan attacks the ball during the Aztecs' 3-2 victory over San José State on Sept. 27 at Peterson Gym.

The Aztecs were four points away from clinching a three-set sweep.

Instead, the Spartans fought back and took the next two sets, forcing the Aztecs into yet another five-set match against SJSU.

After a net violation for the match point in the fifth set that made the score 14 all, sophomore outside hitter Victoria O’Sullivan notched her 20th kill of the night to seal the 3-2 conference-opening win for SDSU on Thursday at Peterson Gym.