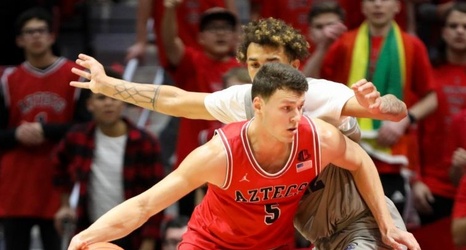 Senior forward Yanni Wetzell attempts to get to the basket in the Aztecs' 68-55 win over Nevada on Jan. 18 at Viejas Arena.

After No. 4 Auburn lost its first game of the season against Alabama Wednesday, No. 7 San Diego State was on watch to see whether or not they could keep that title as the nation’s lone undefeated team.

With No. 3 Duke and No. 5 Butler also suffering losses this week, expect the Aztecs to climb up to at least the top five in next Monday’s AP Top 25 Poll.