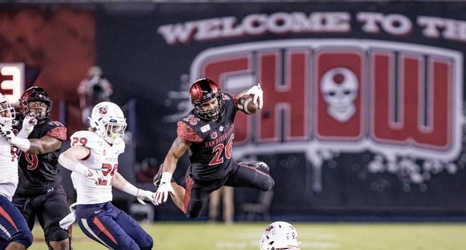 Sophomore running back Kaegun Williams attempts to go airborne for the first down during the Aztecs' 17-7 victory over Fresno State on Nov. 15 at SDCCU Stadium.

A sea of San Diego State football players rushed to the southwest corner of the field at SDCCU Stadium to hoist the Old Oil Can trophy after SDSU clinched a 17-7 victory over Fresno State on Friday night.

“Absolute chaos,” senior quarterback Ryan Agnew said of the postgame celebration. “I remember the last time they won it (in 2017), they ran to our sideline and grabbed it.”

The Aztecs, who had to wait three years for that moment, might’ve felt a sense of revenge while putting their hands on the trophy.