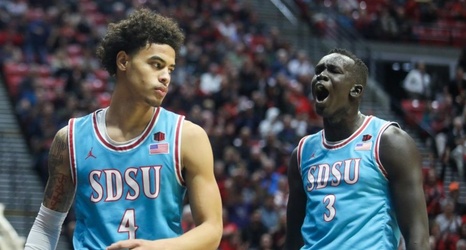 Sophomore forward Aguek Arop (right) is pumped up after a play during the Aztecs' 62-49 win over Tennessee State on Nov. 25 at Viejas Arena.

San Diego State men’s basketball overcame a rough shooting night to record a 62-49 victory over Tennessee State Monday night at Viejas Arena. The Aztecs moved to 6-0 for their best start since the 2010-11 season (when the team finished 34-3). Here are three observations during SDSU’s victory.

1. Aztecs go almost 9 minutes without a made field goal in the first half

The Aztecs had their biggest lead of the first half when they were up 21-10 with 8:50 left.