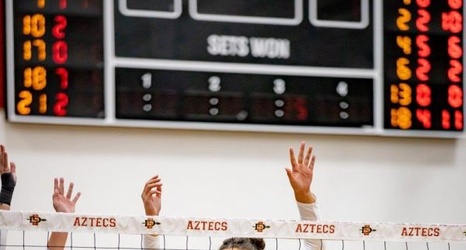 Senior middle blocker Tamia Reeves attempts to block a spike in the Aztecs' 3-2 loss to Boise State on Oct. 24 at Peterson Gym.

But the Aztecs did not go down without a fight.

Throughout the match, there were a total of 15 ties and six lead changes. SDSU recorded only 10 errors while CSU had 18.

Collins-Parker said the key to keeping up with the Rams was forcing more pressure on their offense and focusing on playing exceptional volleyball.