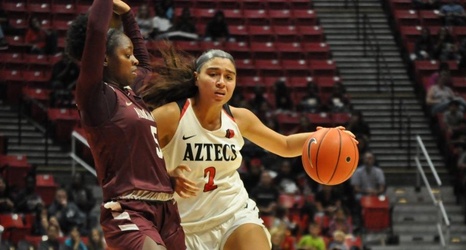 Sophomore guard Sophia Ramos attempts to shrug off the Alabama A&M defender during the Aztecs' 61-53 loss on Nov. 14 at Viejas Arena.

San Diego State women’s basketball fell to Alabama A&M by a score of 63-51 on Nov. 14 at Viejas Arena.

The Aztecs (2-2) dropped their second game of the season while falling short of making a 24-point comeback.

“This wasn’t our best game,” senior center Zayn Dornstauder said. “(Head coach Stacie Terry) talked about coming out strong and adjusting which is what we didn’t do. We played better in the second half but we needed that sooner.