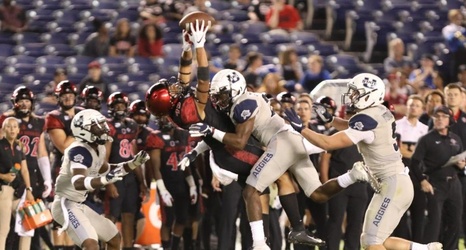 With 1:18 left in the fourth quarter, San Diego State football senior quarterback Ryan Agnew had the opportunity to eliminate the 20-point deficit the Aztecs encountered entering the final frame.

Following three straight incomplete passes, Agnew faced fourth-and-10, and the potential comeback was on the line.

The Texas native attempted to escape pressure but was ultimately sacked for 37 yards to give Utah State a 23-17 win on Sept.