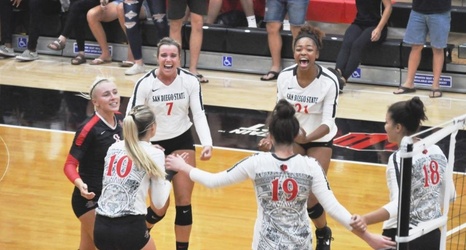 Senior outside hitter Hannah Turnlund (7) and sophomore outside hitter (21) celebrate an Aztec point during the Aztecs' 3-2 comeback victory over West Virginia on Sept. 6 at Peterson Gym.

First, they had a three-game winning streak, one of which was against UNLV last Saturday.

Not only was it SDSU’s second road win of the season, but it stopped a nine-match winning streak for the Rebels that coincidentally started on the Montezuma Mesa a month ago.