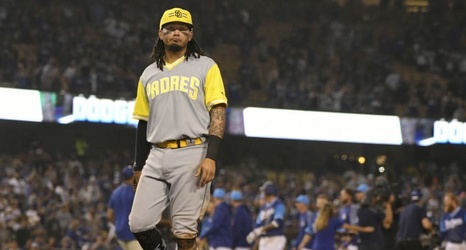 LOS ANGELES, CA - AUGUST 25: Freddy Galvis #13 of the San Diego Padres walks off the field after Justin Turner #10 of the Los Angeles Dodgers hit a game winning double RBI in the 12th inning to defeat the San Diego Padres 5-4 at Dodger Stadium on August 25, 2018 in Los Angeles, California. All players across MLB will wear nicknames on their backs as well as colorful, non-traditional uniforms featuring alternate designs inspired by youth-league uniforms during Players Weekend. (Photo by John McCoy/Getty Images)

We continue our simulated 2020 season of the San Diego Padres on MLB The Show as we move into week six, which was not a great one.