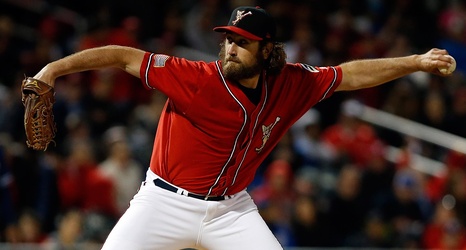 SAN FRANCISCO -- Michael Kirkman woke up Tuesday morning in Salt Lake City on a Minor League contract with Triple-A El Paso. Before the sun had set, Kirkman, a 29-year-old left-handed reliever, had already joined the Padres in San Francisco.

With a beleaguered bullpen in need of reinforcements, the Padres selected Kirkman's contract from Triple-A and optioned Jose Pirela back to El Paso. In order to clear room for Kirkman on the 40-man roster, the club designated right-hander Cory Mazzoni for assignment.

"Our bullpen's been pushed too hard lately," said Padres skipper Andy Green. "We've had a number of starts that haven't gone too deep in the game.