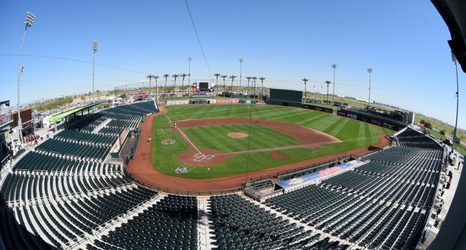 GOODYEAR, ARIZONA - MARCH 18: An overview of Goodyear Ballpark prior to a spring training game between the Cleveland Indians and the San Diego Padres at Goodyear Ballpark on March 18, 2019 in Goodyear, Arizona. (Photo by Norm Hall/Getty Images)

After MLB owners approved the league’s proposal on Monday, it was presented to the MLBPA on Tuesday? Will we have a Padres season?

As expected, MLB owners approved the league’s proposal for an approximately 82-game schedule that would begin on July 4. The sign-off came quickly on Monday, and the fate of the Padres season lay in the hands of the MLBPA on Tuesday.