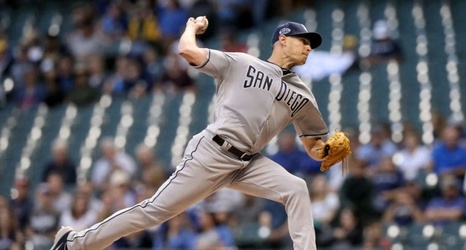 MILWAUKEE, WISCONSIN - SEPTEMBER 16: Garrett Richards #43 of the San Diego Padres pitches in the first inning against the Milwaukee Brewers at Miller Park on September 16, 2019 in Milwaukee, Wisconsin. (Photo by Dylan Buell/Getty Images)

In Baseball Reference’s simulated season, Garrett Richards was traded after six starts with the Padres. Does that make him the most expendable?

Working his way back from Tommy John surgery, Garrett Richards made three starts to close out 2019. He tossed just 8.2 innings, but he was off to a tremendous start in spring training and was expected to be a key piece of the Padres rotation.