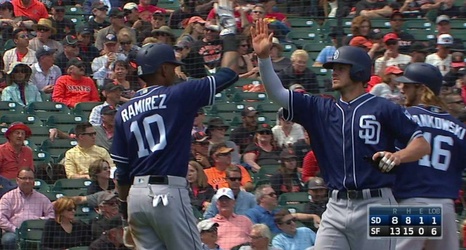 Meanwhile, Padres starter Andrew Cashner took a step back after a pair of solid performances. He was roughed up for six runs (three earned) in just 2 2/3 innings. Cashner needed 89 pitches -- only 48 of which were strikes -- to get eight outs. He walked four and allowed four hits.

Matt Kemp, Wil Myers and Adam Rosales homered for San Diego. Myers' long ball extended his hitting streak to 12 games, tying a career high, but it wasn't enough, as the Padres dropped their fifth straight and their eighth in a row in San Francisco.