Cashner to DL; Perdomo to rotation 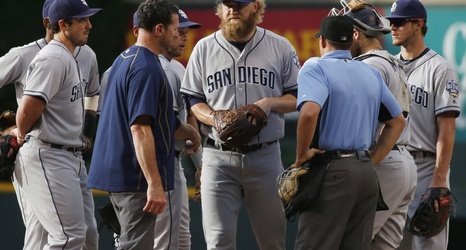 DENVER — Luis Perdomo was already on four days rest when Andrew Cashner walked off the mound Friday night with a strained neck after just six pitches. That made the 23-year-old Rule-5 rookie the logical choice to replace Cashner in the rotation when the 29-year-old right-hander awoke Saturday morning without any improvement.

Momentum is certainly on Perdomo’s side, too.

“Perdomo threw the ball well yesterday – he’s stretched out,” Padres manager Andy Green said after the team put Cashner on the 15-day disabled list. “We like the way he’s progressing. His numbers aren’t where we’d like them to be, but I think the progress you’ve seen when you’ve watched him pitch (shows) there’s reason for optimism … that he’s going to turn into a really good starting pitcher.