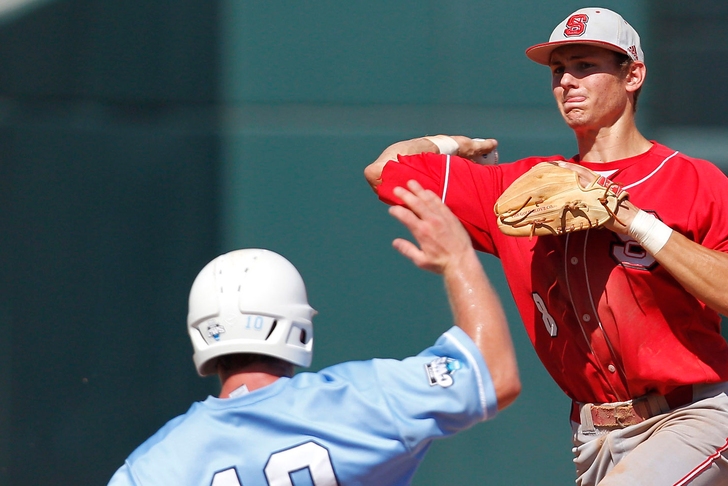 The San Diego Padres traded shortstop Trea Turner to the Washington Nationals earlier this month under the guise of the age-old 'player to be named later' designation, but an archaic Major League Baseball rule requires that the 13th overall pick in last year's MLB Draft remains with the Padres until June.

Per FOX Sports' Ken Rosenthal, "Major-League Rule 3(B)(6) states that a drafted player cannot be assigned to another club for one year after signing his original contract. Thus, Turner must spend spring training and the first part of the season with the Padres, knowing he has been traded."

Turner's agent, Jeff Berry of CAA, is furious over the matter, telling FOX Sports on Friday night that he "will vigorously pursue all available courses of action to remedy this situation,” including filing an official grievance with the players' union.

Berry added that it is “unconscionable” that Turner must remain with a Padres organization that already has dealt him and thus “has zero concern, motivation or interest in his health, development or performance.”

Turner hasn't 'officially' been named as the 'player to be named later', but Berry and everyone else knows better.

“Regardless of the sham press releases being put out by teams, there is no Player to be Named, there is only the player already named, and that player is Trea Turner,” Berry said.“Trea is one of the top prospects in baseball and on a fast track to the Major Leagues. In this case, the plan to ‘trust us’ is not enough when it comes to a player's well-being and career.

“Given the circumstances and the undoubtedly negative impact on Trea Turner, for the teams involved and Major League Baseball to endorse and approve this trade is not only unethical, but also goes against the very spirit of the Minor League Uniform Player Contract that players sign when they first enter professional baseball," Berry added. "That contract requires a player to ‘serve the club diligently and faithfully.’ Shouldn’t the clubs and the controlling parties at Major League Baseball be held to the same standard?”

It's a fair question that Berry poses, but whether or not Major League Baseball be willing to allow an exception to the rule to accommodate Turner's situation remains to be seen.