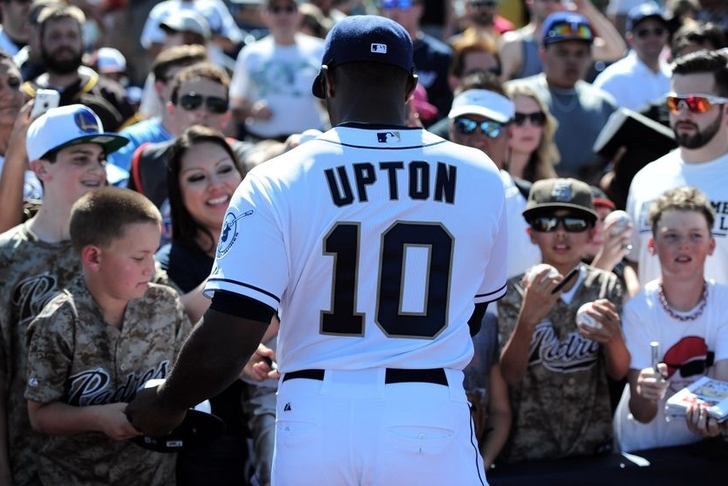 We're less than three weeks away from the 2015 MLB trade deadline, which means there are plenty of rumors swirling around the San Diego Padres and what they might do on the trade market. Here are three trades they could make at the deadline:

The Padres' big moves in the offseason have been a dud, as they sit well under .500 at the All-Star break. That will cause them to be sellers at the deadline, and since Upton has been productive (.259 /14 HRs / 46 RBIs), he's the most likely candidate to be moved.

New York desperately needs another bat, which Upton would provide in abundance. Avelino and Eovaldi are two of the best prospects in the Yankees system, and if San Diego is looking to shed salary, this would be a great value move.

The Padres have asked teams about any possible interest in James Shields, according to Peter Gammons of GammonsDaily.com. If that's the case, Shields suddenly becomes arguably the best pitcher on the market, drawing the interest of a Red Sox team in dire need of starting pitching.

Holt was a surprising All-Star this year, but his ability to play anywhere on the field would be extremely valuable to the Padres' rebuild. Pitcher Owens and shortstop Marrero (who was recently called up to the majors) are two of Boston's top prospects, and guys Cincinnati would be smart to ask for.

Kimbrel is the highest paid member of what has been a terrible bullpen for the Padres this year, and is the most likely candidate to be dealt from the group as San Diego looks to shed salary. Detroit would like to upgrade their bullpen, and since they're in win-now mode, they'd be willing to give up a few prospects to land Kimbrel.