Spurs Weekly: San Antonio Continues To Fly Under The Radar While Dominating 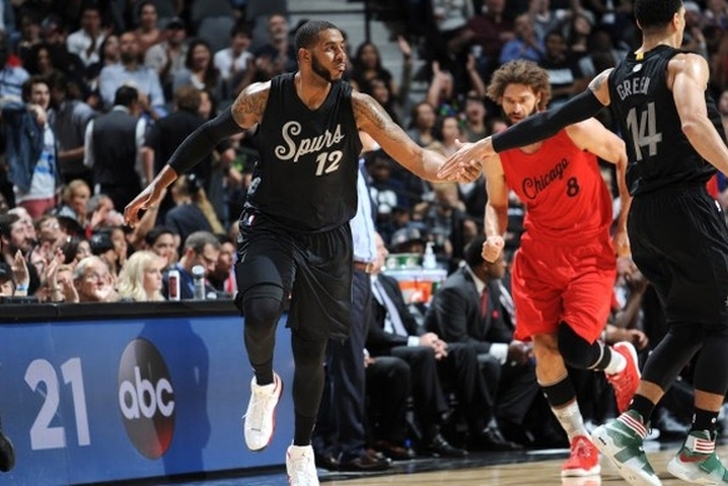 The San Antonio Spurs continue to roll this season, as a blowout win over the Chicago Bulls on Christmas Day pushed their record to 25-6 on the season. They're now just a game and half behind the Warriors for the best record in the league, and have gotten there in convincing fashion of late. Let's get you up to speed with the week that was and the week ahead with our Spurs Weekly update:

Last Week:
The Spurs started a three-game road trip on Tuesday in Houston against the Rockets, and the matchup between two of the West's best teams went back and forth throughout the entire contest. However, San Antonio got their fifth straight win when Patty Mills drained a three with just 12 seconds left to give them the 102-100 victory.

Unfortunately for the Spurs, that win streak came to an end on Thursday against the Clippers. LA's bench outscored the Spurs' reserves 58-33 as they played without Blake Griffin and half the game without Chris Paul, who was hurt in game. It was only San Antonio's second road loss of the season.

The Spurs were quick not to let that start a losing streak, however, as they got a 110-90 win over the Portland Trail Blazers on Friday in the second game of a back-to-back. That led to their Christmas Day game against the Bulls, which resulted in another blowout win. LaMarcus Aldridge started the game shooting 9/9 from the field and dropped 20 points in the first quarter on his way to a season-high 33 points for San Antonio's 119-100 win.

What's Next?
San Antonio gets two days off before playing the final two games of their homestand, hosting the Phoenix Suns on Wednesday and the Blazers on Friday. The Spurs will close the week on the road against the Atlanta Hawks on New Year's Day. For more on the Spurs' upcoming games, download the Chat Sports Android and iPhone app.

What They're Saying About The Spurs:
Power Rankings Week 10: Spurs are showing some signs
Postgame Wrap: Aldridge unstoppable in Spurs win over Bulls
The Spurs, their competition, and the NBA’s Death Star