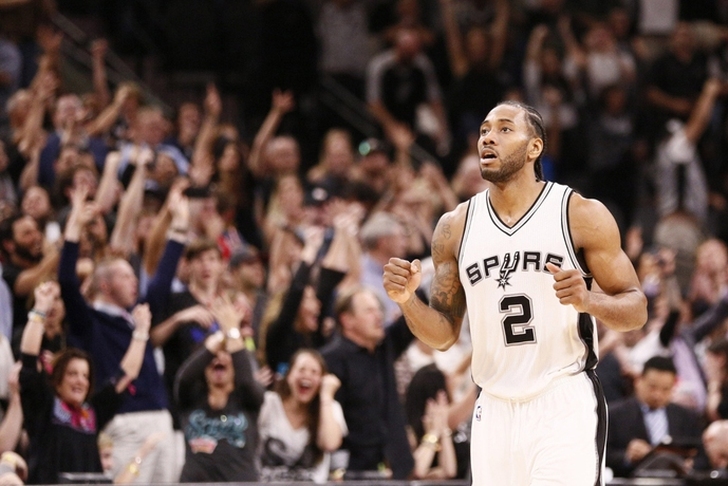 The San Antonio Spurs are peaking at the right time, winning six of their last eight games as they head down the stretch. They had the top seed in the Western Conference for a split second, but lost it with a two-game losing streak. Now, they've won four games in a row and are challenging the Golden State Warriors for that spot once again. Let's get you up to speed with the week that was and the week ahead with our Spurs Weekly update:

Standings:
The Spurs currently two games behind the Warriors in the standings, but are a full six games ahead of the Houston Rockets for second place in the West with just 10 games left on the schedule.

This Week:
San Antonio's week started at home last Sunday against the Sacramento Kings, and after a slow start, turned it on for a 118-102 win. Led by 22 points from Pau Gasol and 18 from LaMarcus Aldridge, the Spurs turned a six-point deficit at the end of the first quarter into a 28-point lead in the second half.

The Spurs turned that into a winning streak on Tuesday in a 100-93 win over the Minnesota Timberwolves. Kawhi Leonard scored 20 of his 22 points in the second half, and the Spurs scored the last eight points of the game to get the victory.

San Antonio then started their current four-game homestand on Thursday against the Memphis Grizzlies, and emerged with the 97-90 win behind 23 points from Aldridge. Their domination continued on Saturday night with a 106-98 win over the New York Knicks thanks to big nights from Leonard (29 points) and Aldridge (19 points, 10 rebounds).

What's Next?
This week, the Spurs play four national TV games against four of the top teams in the league. They'll start on Monday against the Cleveland Cavaliers on TNT, when will host the Warriors for the final time in the regular season on Wednesday on ESPN. San Antonio then hits the road for another ESPN game on Friday against the Oklahoma City Thunder before closing the week at home against the Utah Jazz on Sunday on ABC. Read more Spurs news in the Chat Sports iPhone and Android apps.

What They're Saying:
Why Pau Gasol is so Hot from Three (Project Spurs)
The Biggest Week of the NBA Season is Here. (Fansided)
Hammon could trade Spurs sideline for Gainesville with Flordia offer (Project Spurs)

Follow our San Antonio Spurs news page for all the latest Spurs news, or download the Chat Sports App!