Spurs vs. Warriors: What We Learned From San Antonio's 87-79 Win 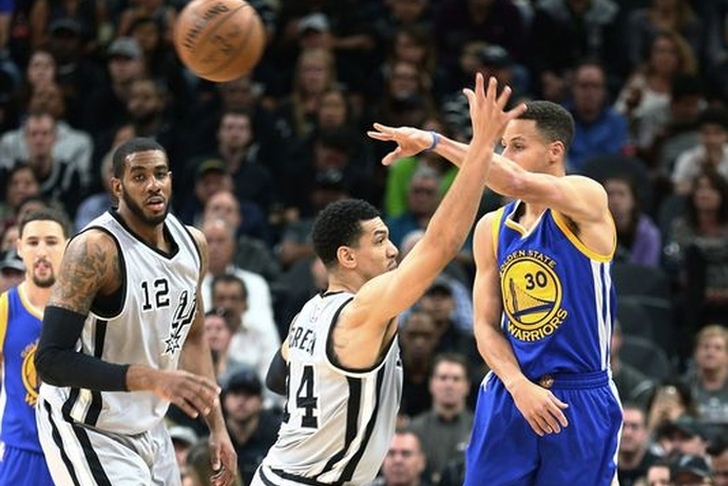 The San Antonio Spurs extended their home win streak to 44 games with an impressive 87-79 win over the Golden State Warriors on Saturday night, handing the Warriors just their seventh loss of the season. Many expect these two to meet up in the Western Conference Finals, so these regular season games between the two can tell us a lot about what to expect moving forward. Here are three things we learned from the game:

3) San Antonio's size is a problem for Golden State
The Warriors were forced to go smaller than normal with Andrew Bogut sitting out with a toe injury and LaMarcus Aldridge was able to do whatever he wanted against Draymond Greene & Co. as a result, scoring 26 points to go along with 13 rebounds. You have to think Bogut would've limited his effectiveness, but it's also worth noting that Tim Duncan only played eight minutes last night - and we all know what he can do. Golden State is going to have to come up with a new plan to slow San Antonio's bigs.

2) Gregg Popovich has an answer for Stephen Curry...maybe
Curry had his worst game of the year last night, shooting just 4-18 from the field (including 1-12 from three) on his way to a lackluster 14-point night. After guarding him with a very vanilla defense in their first meeting, Spurs head coach Popovich changed up their strategy on Curry - being physical with him and pressuring him at every turn.

“They picked him up really high out,” Warriors head coach Steve Kerr said. “He missed some shots he normally makes, but he also had to take some tough ones.”

The Spurs sent multiple players at Curry on the perimeter to contain him, and outstanding efforts from Danny Green and Kawhi Leonard kept him in check. Now we know that San Antonio does have an answer for Curry's greatness - the next step is figuring out how the Warriors will adjust.

1) The Western Conference Finals are going to be the better than the actual Finals
San Antonio showing they can beat the Warriors only escalates the hype that will surround the Western Conference Finals, assuming both of these teams make it. Each are on pace to win over 70 games this year (something only one other team has done in NBA history) and they're clearly the two best teams in the league.

Golden State clearly looked like the better team in their 120-90 win at home over the Spurs in late January, but now the Spurs have shown they have what it takes to win, too. We can only hope the basketball gods bless us with seven games between these two, which is the highest-quality basketball there is to offer.