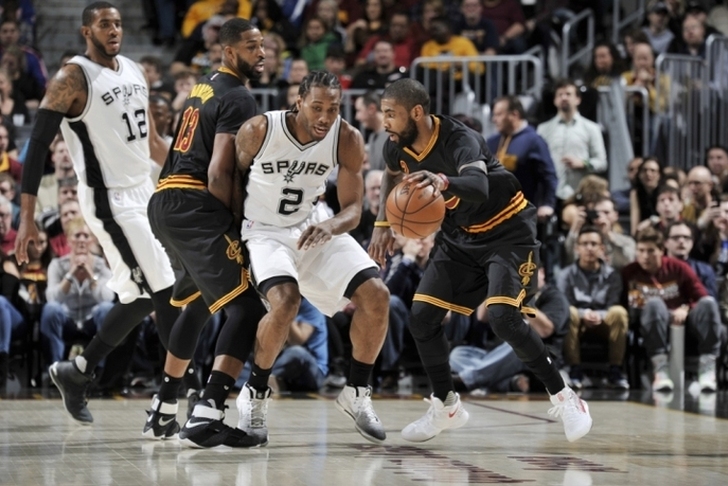 The San Antonio Spurs were one of the four teams that Kyrie Irving told the Cleveland Cavaliers he would like to be traded to, and while the Cavs don't have to abide by Irving's list since he doesn't have a no-trade clause, the Spurs have emerged as a serious threat to land him, according to ESPN's Adrian Wojnarowski.

The Spurs have interest in Irving, league sources say, and Irving's willingness to commit to an extension with the Spurs makes for legitimate win-now deal possibilities for Cleveland. Without James beyond next season, though, the likes of LaMarcus Aldridge, Tony Parker and Danny Green hold no appeal.

However, there are a few factors complicating a potential trade. Along with Cleveland's lack of interest in players the Spurs can offer, they have their eye on four young stars and want one in return for Irving.

LeBron hasn't been willing to commit to the Cavs beyond this season, yet has also refused to waive his no-trade clause for any team. As such, they want to use the return in an Irving trade to protect and prepare themselves for a possible future without either Irving or James by acquiring one of those star young players they can build their future around.

Because San Antonio doesn't have any young stars that fit the bill, they will need LeBron to commit to the Cavs long-term. That happens and Cleveland starts looking to acquire veterans to help them win a championship, which is when the Spurs' available players would come into play.

The other three teams on Irving's list were the Miami Heat, Minnesota Timberwolves and New York Knicks, though the Phoenix Suns and Detroit Pistons have been the two other teams expressing the most interest.