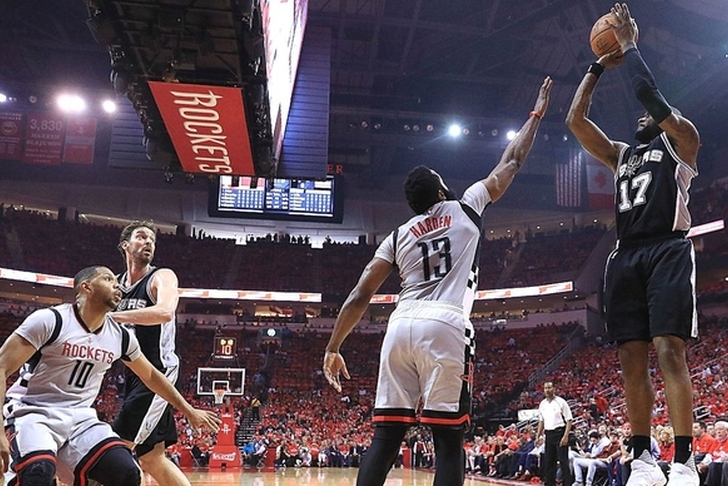 With no Kawhi Leonard, the San Antonio Spurs had no trouble routing the Houston Rockets to advance to the Western Conference Finals. The Spurs took a lead with just over five minutes to go in the first quarter and never gave it up. They lead by at least 20 points for nearly all of the second half in their 114-75 win.

The Rockets' offense more closely resembled the Game 5 overtime offense than rest of year version. The Rockets shot just 27.6 percent from the field, were 13 of 40 from 3-point range and committed 13 turnovers. The Spurs shot 53.1 percent had coughed it up just seven times.

LaMarcus Aldridge, after struggling early in the series, was fantastic in Game 6. He had 34 points and 12 rebounds.

LaMarcus Aldridge (@aldridge_12) has been sharp tonight, unlike the Rockets. #GoSpursGo pic.twitter.com/330tYq1cLC

Jonathon Simmons (@ThaRealJsimms) blows by the Rockets defense and throws down the slam! #GoSpursGo pic.twitter.com/2P1vMzSsb6

Potential Spurs point guard of the future Dejounte Murray had one of his best games. He had 11 points, 10 rebounds, five assists and two steals.

Dejounte Murray (@DejounteMurray) getting on the rout with the alley-oop from Kyle Anderson! #GoSpursGo pic.twitter.com/3SVWzZjSHn

James Harden was downright bad for Houston. He had 10 points on just 2 of 11 eight shooting. He had seven assists, but turned the ball over six times before fouling out. Trevor Ariza led the Rockets with 20 points, while Clint Capela had 15 points and 12 boards. Eric Gordon was a non-factor with six points.

The most interesting part of the blowout might have been the mini-scuffle between Green and Ariza.

Danny Green and Trevor Ariza got into a little scuffle. #Rockets #GoSpursGo pic.twitter.com/L3ehGaefEi

The Spurs now face the Warriors in the Western Conference Finals. The Warriors have yet to lose a game this postseason.