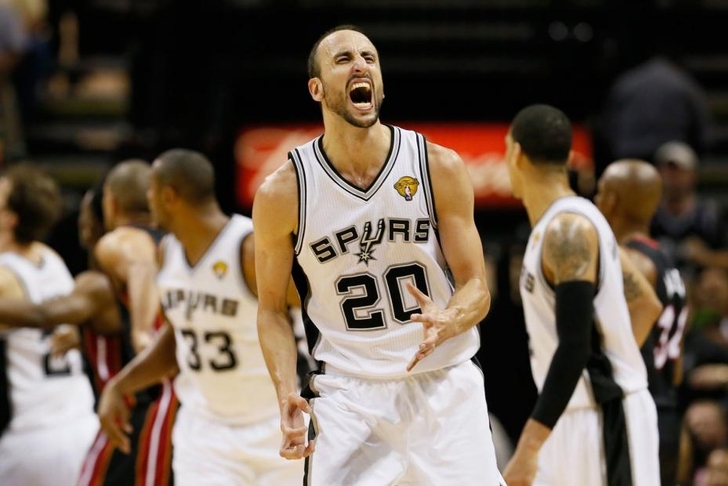 What's next for the San Antonio Spurs as the first weekend of the 2015 NBA free agency period winds down? Find out in our Spurs Free Agency Rumors Roundup For July 5th.

The Latest On Manu Ginobili

With the chance to get the full Big Three band back together to go along with budding star Kawhi Leonard and LaMarcus Aldridge, it's no wonder the Spurs are putting on the full-court press in hopes of assembling a true Western Conference juggernaut.

What's The Next Move?

With Aldridge in tow, the Spurs' focus now turns to secondary options to flesh out the back of their rotation for 2015-16.

However, as Dan McCarney of MySA points out, "with limited resources — it’s still impossible to know how much space the Spurs have left, if any, without knowledge of Duncan’s new contract — they’ll very likely have to dip into the pool of cheap veterans, a number of which they’ve already been linked to. The biggest needs would appear to be a wing and a true backup center. (While Duncan has essentially been a five for much of his career, having another body to soak up 10-15 minutes of pounding, a la the departed Tiago Splitter, is desirable.)"

Once the free agency moratorium lifts on July 9th, the Spurs will have eight players under contract -- five short of fielding a full unit for next season.

"The Cavaliers are interested in the free agent forward, a league source confirmed," Jason Lloyd of the Akron Beacon Journal writes. "The interest appears mutual, although USA Today reported the San Antonio Spurs and Golden State Warriors are also high on West’s list. The Spurs are still in pursuit of West even after landing LaMarcus Aldridge on Saturday."

The veteran forward declined his $12 million player option with the Indiana Pacers before free agency in hopes of latching on with a contender. He'd likely slot it as a rotational sixth man who'd be a first-unit starter on Gregg Popovich's now-notorious superstar rest days.